I was 37 weeks pregnant yesterday!  Finally the baby is considered to be full term so technically he/she could make an appearance anytime in the next few weeks. That is so exciting and I really can’t wait! I’m also convinced that the baby will arrive early so I think I have a maximum of three weeks left of being pregnant. After spending my first two weeks of maternity leave getting all the final bits of preparation sorted (lots of washing, painting the baby’s furniture, ordering the final few items and giving the baby’s room another clean amongst other non-baby tasks I had been putting off) I have had a few more days that have been a little more relaxing. I’ve enjoyed staying in bed until 10ish, bliss,  with one of the cats coming for cuddles then I have slobbed out a little watching TV in between a few small chores here and there. Well, that’s relaxing for me anyway!

One of the other things I ticked off my list was preparing some meals for the freezer. A lot of the advice other mums have given me is to make sure you have some meals ready to just put in the oven for the first week or two so I was determined to get on top of that to make it as easy for Sam and me as possible. Anyone who knows me knows I love food, eating and cooking a lot so I quite enjoyed having a few days of prepping some recipes. So far I have a cottage pie and fish pie in the freezer that’ll feed us for four nights then I found some recipes for some “slow cooker dump meals” that I wanted to try. This basically means you put all the ingredients – for example: chicken breasts; black beans; coriander; lime juice and sweetcorn – in a bag and freeze them until you’re ready to cook the meal. Then all you have to do is defrost the whole lot overnight then pop it in the slow cooker for the required time and forget about it until tea time. So easy. 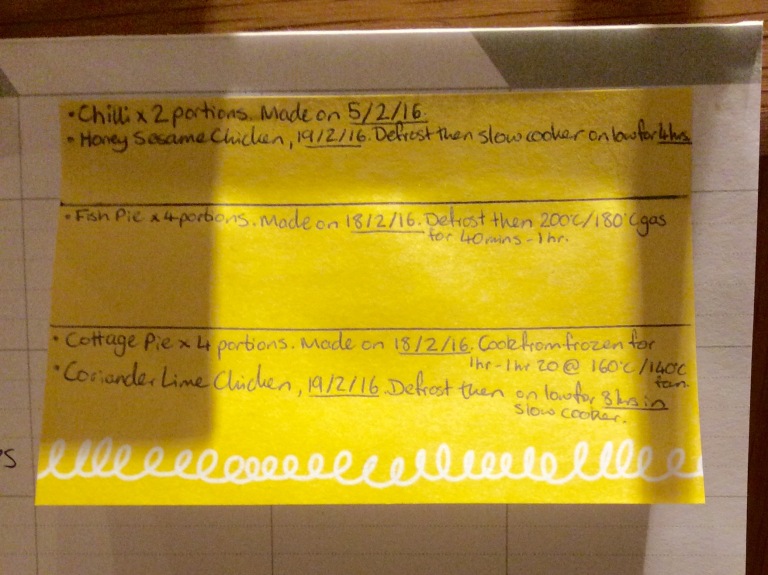 Sam and I went to a meet-up organised by the Hull and East Riding Home Birth Group on Monday. It was so lovely and I’m really pleased we went along. Three of us were pregnant and there were four women there who had had home births previously and it was so good to hear about their experiences and be able to ask any questions we had about the whole process. The lady who we are renting the birthing pool, ball and stool from was at the meeting too and she was so positive and informative as she had worked as a doula previously so she made me feel even more excited about my impending birth. We also took the pool etc. away with us after the meeting and I’m looking forward to giving it a trial run for a lovely hot tub experience in the living room at some point this week!

It was sad to hear that some of the women in the group had had pretty negative experiences surrounding their home births either when speaking to their midwives about it beforehand and getting very negative view points or having really pushy medical staff during their home births. I can’t imagine anything worse than someone who works as a midwife, the person who should be making you feel confident and excited about your pregnancy in general and especially your birth choice, the one you go to with all your questions, making you doubt your decision. I have become used to some friends or colleagues being surprised at my choice to have a home birth and erring on the side of negative comments or expressing their disbelief about what it’ll be like but I’d be so disappointed and shocked if we had received this treatment from our midwives. Hopefully groups like this can help to influence the way in which home and natural births are treated and talked about by midwives and medical professionals in this area.

I made a good start on my labour/birth playlist yesterday. This was one thing I had been looking forward to finally doing when I finished work as I wanted to be able to dedicate a few hours to finding all the songs I wanted on Spotify. The tricky thing is the music I usually listen to the majority of the time is rock: Guns n Roses; Whitesnake; Slash; Dio; Aerosmith etc. but somehow I don’t think this would be the best choice for a relaxed, natural home birth! My other favourite genre is electronic 80s and 90s and again I think that is probably not the most relaxing choice.

Luckily I have always listened to and liked classical music from a young age thanks to my mum being very musical and playing in orchestras as for as long as I can remember so I started with all of my favourite classic pieces (lots from Disney’s Fantasia, one of my favourite childhood films) then added in some acoustic versions of my other favourite rock and pop songs. All the stuff I have read about choosing your music, especially in my hypnobirthing book, says you should select songs that’ll take you back to happy and relaxing times so a lot of the tracks are from our wedding playlist as it was such a lovely day and I thought the memories would easily get my in the required mindset during labour.

I have even managed to add in an acoustic version of mine and Sam’s favourite ever song – Sweet Child O’ Mine by Guns n Roses. I’d love it if I could time it to ask Sam to put the song on as the baby makes its appearance because we walked down the aisle to the song so it would make it doubly special for us.